The project EI-GEO “Environmental impact of geosynthetics in aquatic systems” of the Program ERA.Net RUS Plus (No RUS_ST2017-212) (RFBR via grant No. 18-55-76002, 2018-2020), Germany (The Federal Institute for Materials Research and Testing (BAM)), Latvia (Latvian Institute of Aquatic Ecology (LIAE)) and Russia (P.P. Shirshov Institute of Oceanology of Russian Academy of Sciences (SIO)

Geosynthetics are widely used in hydraulic engineering and within coastal protection constructions at the Baltic Sea shore, such as embankments, gabions walls, seawalls, offshore breakwaters, artificial reefs, and other. There are main categories of the geosynthetics (geotextiles, geocells, geogrids, geocomposites, geonets, geomembranes, geosynthetic clay liners, geofoam and drainage / infiltration cells) are used in the soil for filtration, drainage, separation, reinforcement and stabilization purposes.

Storms influence leads to deformation of some of the protection structures and cause the release of geotextiles onto the beach. Fragments of geotextile migrate along the shore, experiencing additional degradation and destruction down to macro-, meso-, and micro-particles. During October 2017 – March 2020, the Baltic Sea shore along the Sambia Peninsula (Kaliningrad Oblast of the Russian Federation) was monitored to establish the contamination of sandy beaches by geotextiles that had degraded. Several local sources of pollution of beaches by geosynthetic materials were established, namely, the coastal protection constructions located on the shore of the Sambia Peninsula (Fig. 1.).

Worn geosynthetic materials are broken under the wind-wave action, and its parts migrate over long distances along the shore of the region (Fig. 2.). This geosynthetics undergoes photodegradation, thermo oxidation, hydrolysis, biodegradation, abrasion, and thus becomes torn and breaks up into smaller parts (Fig. 3). Fibres from disheveled geotextiles and fragments from deformed and broken geosynthetic materials are easily separated and transferred into another size range – from mega/macroplastics to meso/microplastics. 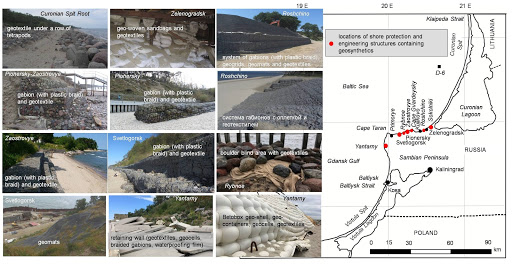 Fig. 2. Deformed geotextiles (from coast protection structures) which are migrated along the shore: nonwoven geotextiles (a-f), geocells from the slope in Pionersky (g-i) , and the  fragments of geosynthetics from the gabions metal nets with plastic coating (j-l) (Photos by Esiukova E.)