Microplastics in the Baltic sea water.

Distribution of microplastics particles (MPs) in the water column is investigated on the base of 95 water samples collected from various depths in the Baltic Sea Proper in 2015–2016.

Fibres are the prevalent type of MPs: 7% of the samples contained small films; about 40% had (presumably) paint flakes, while 63% contained coloured fibres in concentrations from 0.07 to 2.6 items per litre. Near-surface and near-bottom layers (defined as one tenth of the local depth) have 3–5 times larger fibre concentrations than intermediate layers. Laboratory tests demonstrated that sinking behaviour of a small and flexible fibre can be complicated, with 4-fold difference in sinking velocity for various random fibres’ curvature during its free fall.

Numerical tests on transport of fibres in the Baltic Sea Proper were performed using HIROMB reanalysis data (2007) for the horizontal velocity field and laboratory order-of-magnitude estimates for the sinking velocity of fibres. The model takes into account (i) motion of fibres together with currents, (ii) their very slow sinking, and (iii) their low re-suspension threshold.

Sensitivity of the final distribution of fibres to variations of those parameters is examined. These experiments are the first step towards modelling of transport of fibres in marine environment and they seem to reproduce the main features of fibres distribution quite well.

Plastic pollution on the Baltic beaches of the Kaliningrad region 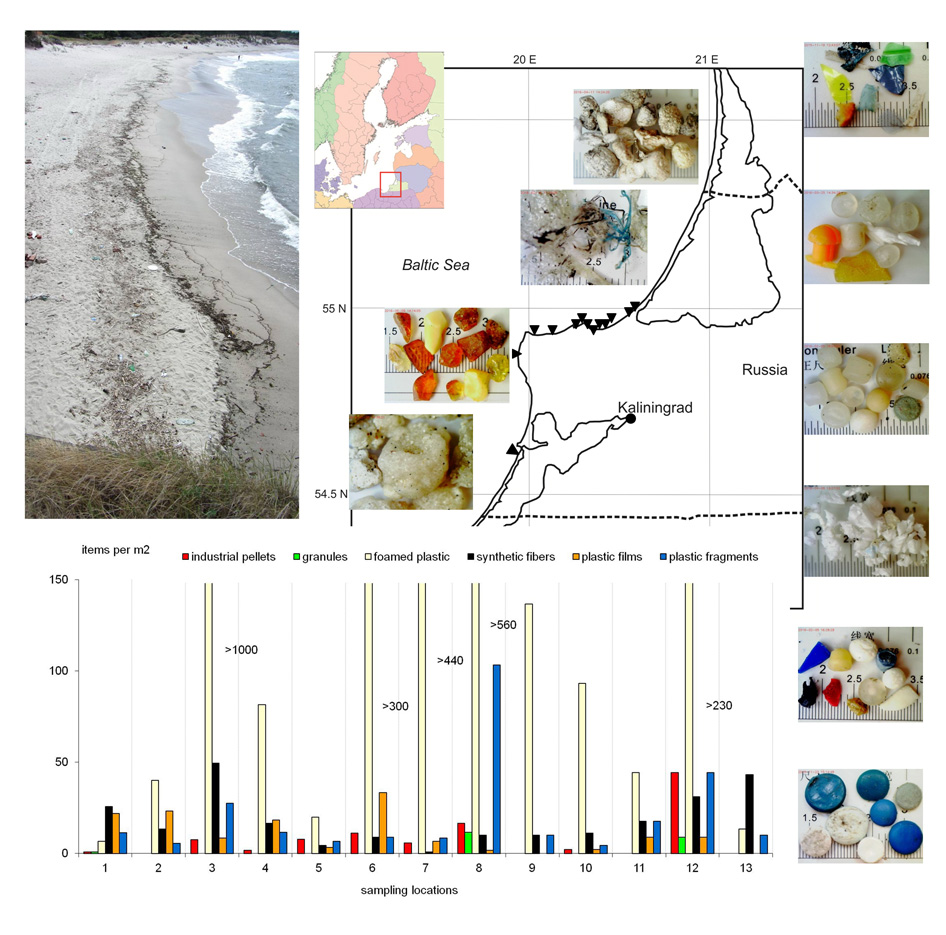 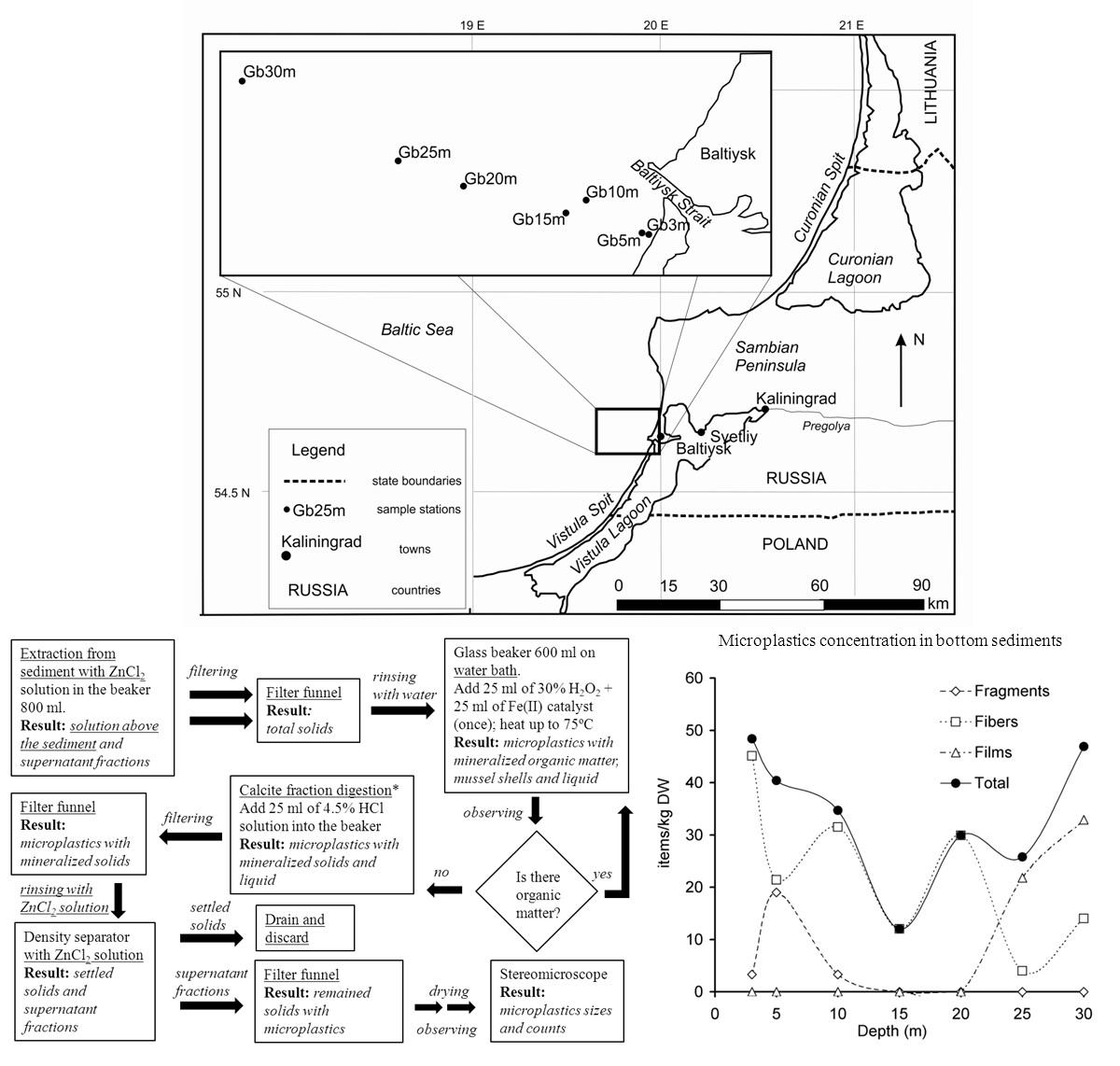 36 water samples were obtained and analyzed using light microscope with tenfold magnification. The visual examination of the filters taken from the bottom layers showed that they are clean, with the number of particles and fibres from 0 to 2 pieces per sample. In the surface water samples, the crumpled organic matter, large number of fibres of different colors and sizes, and particles of paint are observed. In first stage of cruise, the fibres were detected in 10 samples,  flakes of paint were revealed in 11 samples while in the third stage of cruise, the fibers were indicated in 11 samples, flakes of paint – in 8 samples correspondingly. The colors of fibers are red, blue, and green, with the sizes ranging from 0.5 to 10 mm and thickness of 10 mcm. Apart from the fibers, several semitransparent films of greenish color at surface water layer and single sticky whitish sheet at the lower level were found with sizes of 1.5 mm and 1 mm respectively. The whitish sheet was destroyed easily while touching by needle. 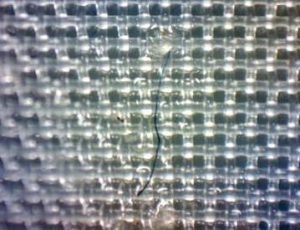 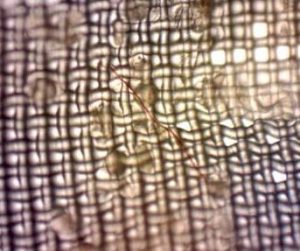 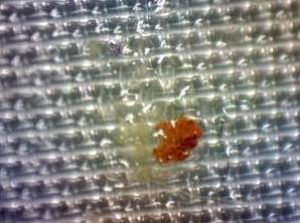 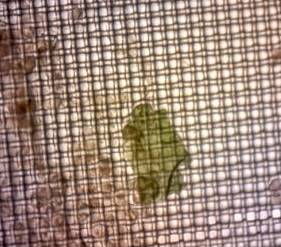 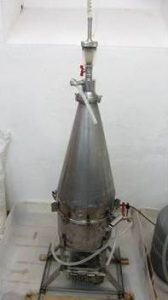 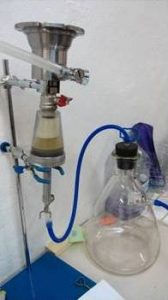 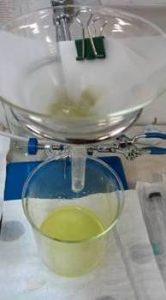 Cameral treatment of bottom sediment samples made by separator (photos by E. Esiukova). 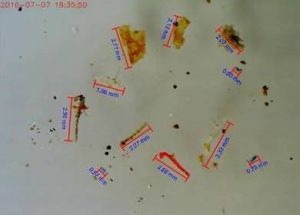 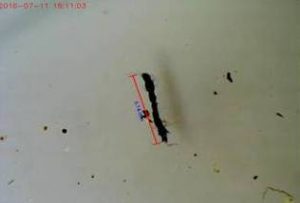 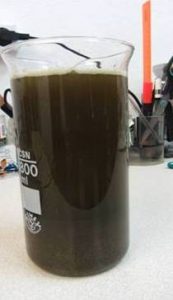 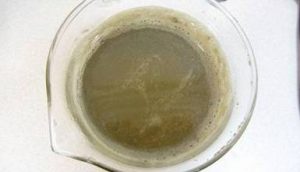 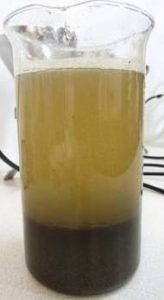 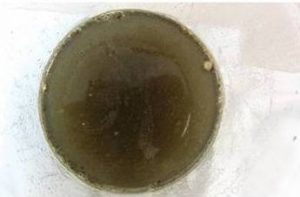 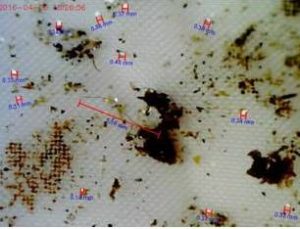 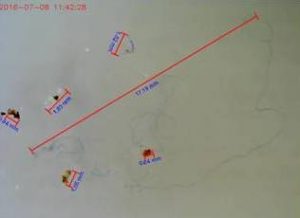 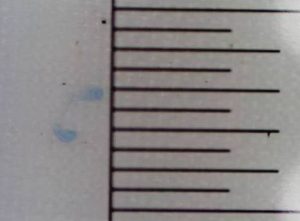 Analysis of water samples show that the very tiny particles and probably amber crumbs with specific color are observed on the filters. There is no excessive amount of plankton, algae, sticks, and other particles related to the microplastics. 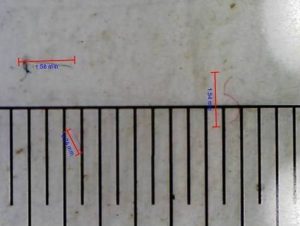 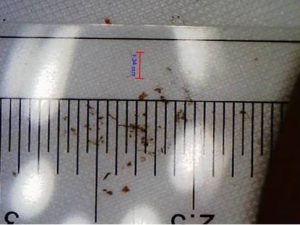