The 37th cruise of r/v “Academic Nikolay Strakhov” was held in the Russian economic zone in the south-eastern Baltic Sea. The overall goal of the cruise was seasonal monitoring of the ecosystem in the Baltic Sea. The MARBLE project tasks were mainly focused on investigations of microplastics concentrations on the surface, in the water column and the bottom sediments of the area. 17 samples were taken with Niskin bottles and plankton nets from the water column. 8 bottom samples were taken from various types of sediments for further analysis. It is worth noting that this cruise was very “young”: 13 out of 14 scientific staff members were young scientist under 35. 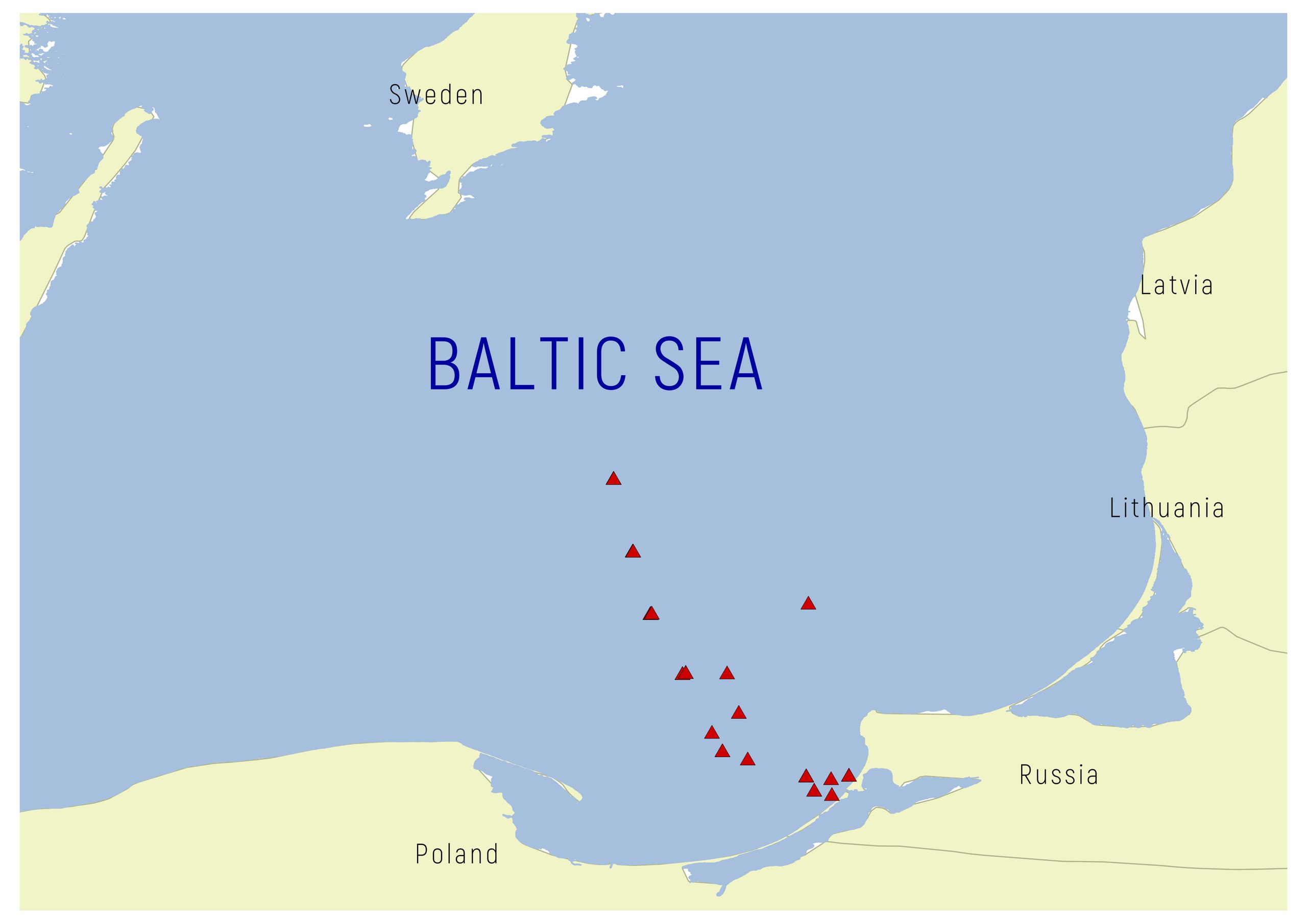 The map showing sampling sites where microplastic samples were collected.

The cruise took place in the Baltic Sea economic zones of Denmark and Poland. The works included hydrophysical, biological, and geophysical observations and measurements. The water column samples were taken by means of the PLEX device, and other equipment for water and bottom sampling were applied. As a result, 77 samples from the water column (different horizons) and 17 bottom sediment samples were delivered to the land-based laboratory at the Atlantic branch of P.P. Shirshov Institute of Oceanology (Kaliningrad, Russia) for further investigation.

Mikhail Zobkov is preparing the filtration block of the PLEX device. 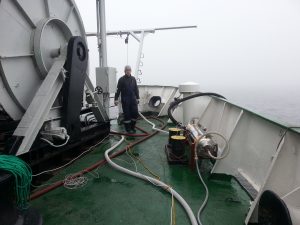 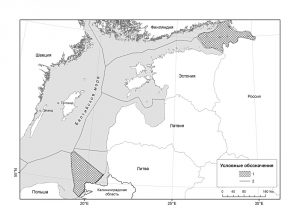 The work area of the 35th cruise of r/v “Academic Nikolay Strakhov” (ANS 35). 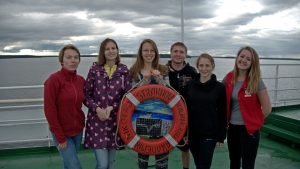 The cruise works were done in the Baltic Sea, including the territorial waters of Russia in the south-eastern Baltic and the Gulf of Finland. The MARBLE team members Lilia Khatmullina and Irina Efimova collected samples from the sea surface, bottom sediments, and the water column, as well as conducted hydrometeorological observations. The samples were taken using different techniques and at different weather conditions. All in all, 48 samples were taken from the near-surface and near-bottom water layers at 26 stations using the Niskin water sampler. The original neuston net was used to collect 9 surface water samples, and the Van-Veen grab sampler was applied to collect 32 samples of the bottom sediments. A new sampling technique was tested, when the WP-2 townet was dragged from a certain horizon to the surface continuously and the filtrate was then concentrated, filtered through a net with a smaller mesh size and preserved properly for subsequent examination in the laboratory of the institute.

The ANS 35 cruise was moving from Gothenburg to Kaliningrad in the economic zones of Denmark, Sweden, Poland, and Russia. The general scientific program included hydrophysical, geological, biological, and geophysical tasks. The MARBLE project tasks were to take samples of water surface, water column, and bottom sediments. Altogether, there were 9 water surface samples taken, 116 samples from the water column, and 9 bottom sediment samples. The PLEX sampling device was tested at different horizons in the water column. In the result, a list of modifications was created and a number of additional equipment to be bought was defined. Possible sources of external contamination of samples were registered and prevention measures were described.

Mikhail Zobkov is preparing the PLEX device for sampling and a filter with some matter after filtration. 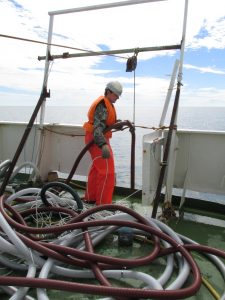 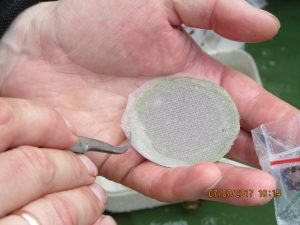 The main task for the PSh 135 cruise for the MARBLE team was to test the PLEX sampling device for water sampling and to fix any operational/structural problems. Bottom sediments sampling were also included in the working plan of the cruise. The PLEX device was adjusted and the optimal sampling procedures were identified. The testing was found successful, with a total of 28 water samples taken from different horizons. Additionally, 5 sediment samples were collected. The map shows the work area of the PSh 135 cruise. Red dots mark water sampling sites with the PLEX device; green dots and the green shaded area – bottom sediments samplings. 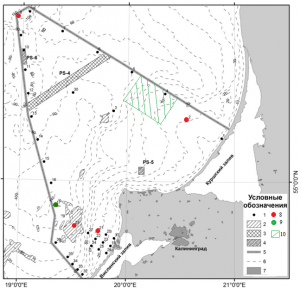 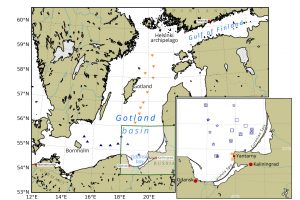 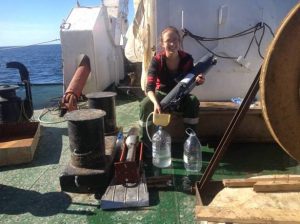 The water and bottom sediments samples were gathered in the south-eastern part of the Baltic Sea. The main goals were (1) to collect the water samples at surface and bottom layers, (2) to filter them for determination of types of microplastics, (3) to collect bottom sediments samples, (4) to test an original towed neuston net designed for the gathering of microplastics samples from the sea surface. 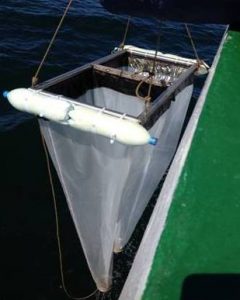 The original neuston net consists of a rectangular frame with two buoys on its sides and two cone-shaped nets of 2m length. Square inlets have equal dimensions of 50?50cm, but the nets have different mesh sizes – 330 and 174 µm. The figure shows the gradual dropping of neuston net into the sea water by main central crane of bow deck. 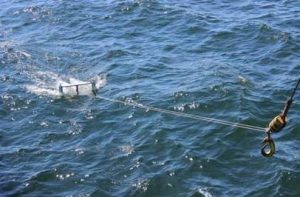 The microplastics sampling from the sea surface performed by neuston net.

The water filtration from bathometer through the funnel with a filter inside. 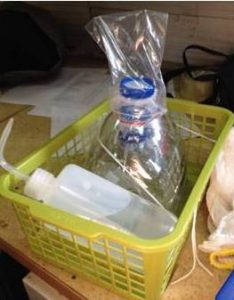 The main goals of the expedition are (1) to test experimental equipment, (2) to perform the vertical probes by CTD OCEAN SEVEN 316 PROBE (Indronaut) on the selected stations indicated on the map, (3) to collect bottom sediment samples by Van-Veen grab sampler, (4) to gather water samples by ‘PLEX’, (4) to collect the microplastics samples by original neuston net. 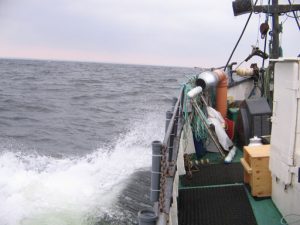 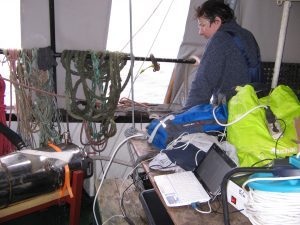 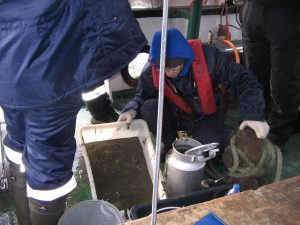 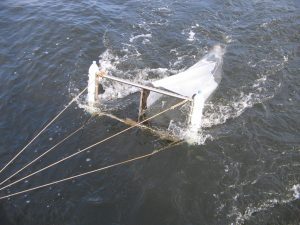 Bottom sediment samples were collected in the eastern part of the Baltic Sea near the Baltiysk Strait inlet. The samples were collected at 7 stations along the line perpendicular to the shore and the isobaths in the depth range from 3m to 30m, reaching as far as 22 km offshore. Rectangular hand-operated dredge “Sea Rat”, constructed by senior researcher V.A. Chechko (Laboratory for Coastal Systems Study, AB IORAS), was used for sampling.

The bottom sediment samples taken at depths ranging from 3m to 30m near Baltiysk Strait inlet.